Brittney Valdez is the owner of the Strut Ballroom Studio.

Brittney Valdez is a professional dance instructor and competitor, as well as the owner of Strut Dance Studio (formerly Ballroom City).  Brittney found her love of dance in college, spending most of her time at school salsa dancing. At the age of 21 she began formal dance training while working for Fred Astaire, Buffalo Grove. It was here she earned her silver level certifications in American Style Ballroom and met her competitive partner Aleks Nashev. In 2010 the two of them would go on to have an undefeated competitive season in the Rising Star Rhythm category, ending it with the title of United States Rising Star Rhythm Champions.

In 2011, Brittney began her career as an independent instructor at Ballroom City and was exposed to many more dance styles outside of Ballroom, such as West Coast Swing and Country Western, the social aspects of which have had a great impact on her dancing. In West Coast Swing, she has worked her way to an All-Star level and actively competes on the West Coast Swing circuit. Country dancing is her most recent competitive venture beginning in 2016.  Since then, she has won two UCWDC World Championship Division One titles.  She won the first title with her coach Gary McIntyre for Pro/Pro Open Division One in 2017.  She won the second title with her then partner Eric Nava in 2018, which earned them a place in the sought-after Masters Category.  As a Masters level dancer, she placed 5th with Eric Nava in 2019 and then most recently 3rd with new partner Ronnie DeBenedetta at the 2020 UCWDC World Championships.

2021 marks the beginning of her latest dance endeavor – owning and operating Strut Dance Studio! While her competitive experience has provided her an invaluable dance foundation, the creative freedom she finds on the social floor thanks to that foundation gives her the greatest joy.  As an instructor and studio owner, she is most passionate about helping others experience the joy that comes with learning to tap into their own creative voice on the dance floor. 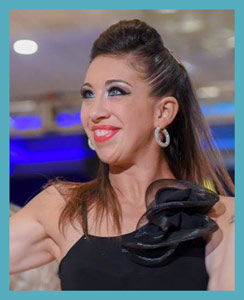